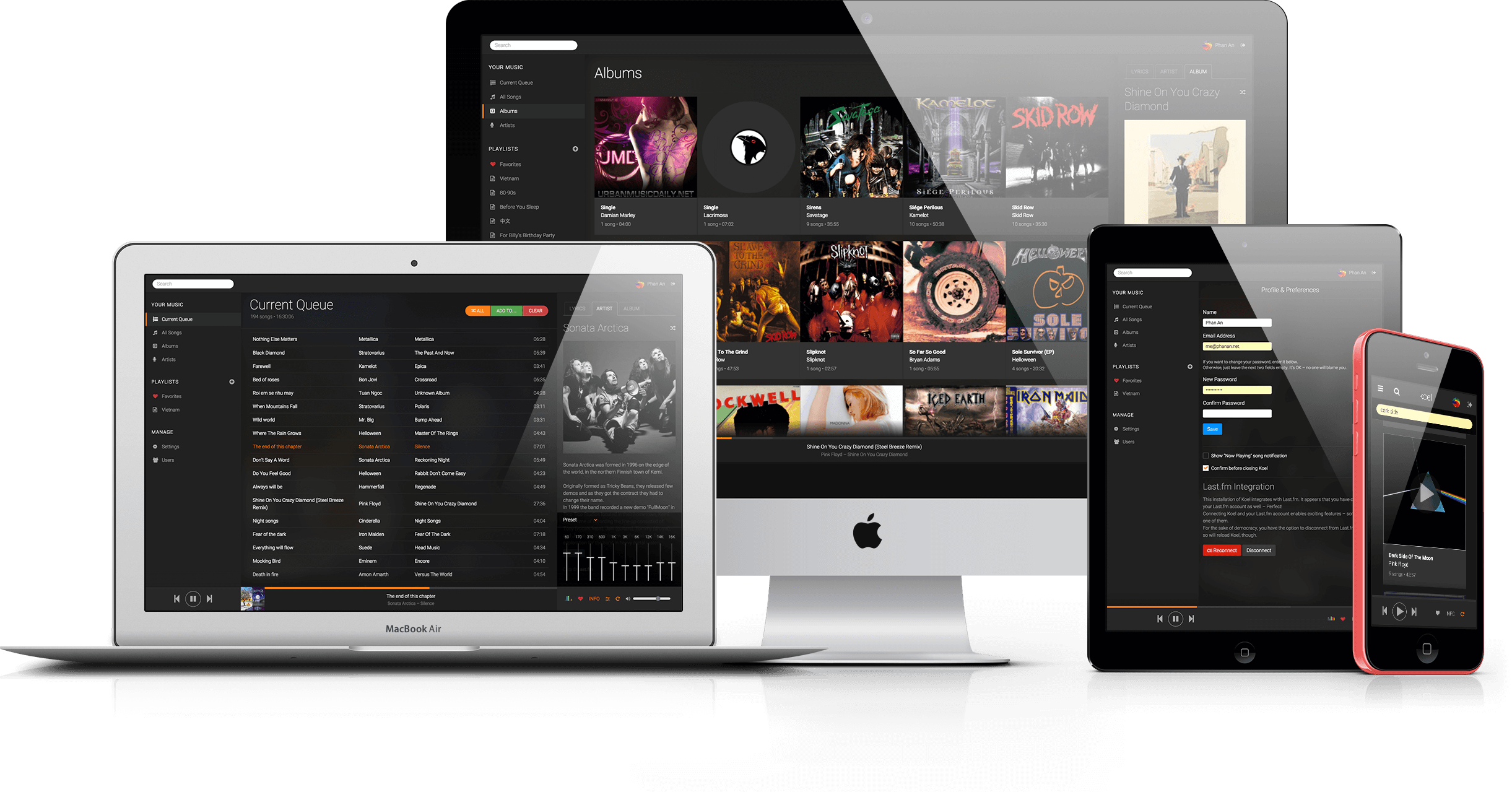 Koel (also styled as koel, with a lowercase k) is a web-based personal audio streaming service written in Vue at the client side and Laravel on the server side. Targeting web developers, Koel embraces some of the more modern web technologies to do its job.

Koel has two components, each with its own set of requirements:

There are three methods to install and start using Koel:

Starting from v5.0.0, Koel supports installing from a pre-compiled archive, which eliminates the need of manually compiling the front-end assets.

First, go to the Releases page on GitHub, download either the .tar.gz or .zip file found under "Assets," and unzip it into the destination web root directory. From there, run the two following commands:

From your console, run the following commands:

In both cases, you should now be able to visit http://localhost:8000 in your browser and start using Koel.

Use a proper webserver

http://localhost:8000 is only the development server for Koel (or rather, Laravel). For optimal performance, you'll want to set up the production version, the configuration of which varies depending on your webserver of choice (Apache, nginx, Caddy etc.) and is outside of this document's scope, but shouldn't be any different from that of a standard PHP application.

If you want more control, edit .env file. There's quite a few settings there to tweak Koel to your needs.

Check out Releases for upgrade guides corresponding to your Koel version and installation method.

There are several ways for Koel to discover your media files. You can manually scan for songs, configure a watcher, host your files with Amazon S3, or upload files directly using the web interface.

Scanning via the web interface is vulnerable to HTTP timeouts, so if you have a decent-sized library, opt for other methods instead.

Upload your songs into a readable directory on your server – preferably outside of your web root dir – and configure Koel to scan and sync it by setting a "media path" under Manage ▸ Settings.

You can also scan from the CLI – which is faster, without a time limit, and provides useful feedbacks – with the artisan koel:sync command:

Suffix the command with a -v flag for more details e.g. syncing errors.

This command can be added as a cron job, for example to run every midnight:

As of current, Koel recognizes these audio extensions: .mp3, .ogg, .aac, .m4a, .opus, and .flac (experimental with some limitations). Others may be added in the future.

Starting from v4.3.0, you can upload songs directly as an admin by clicking the "Upload" sidebar menu item. Note that you need to set the media path first, as songs will be uploaded into the %media_path%/__KOEL__UPLOADS__ directory.

Depending on how big your files are, you may want to set upload_max_filesize and post_max_size in your php.ini correspondingly, or uploading may fail with a Payload too large error.

Starting from v2.1.0, you can watch a directory and sync on the fly with inotifywait.

# Host your media on Amazon S3

Koel supports three streaming methods which can be configured via a STREAMING_METHOD setting in .env file:

If you're using a Koel mobile app and can't play the songs, try switching the streaming method to x-accel-redirect or x-sendfile instead of php.

STREAMING_METHOD doesn't have effects if you're transcoding or serving songs from Amazon S3.

Using the client component of Koel should be straightforward enough. If you've ever used Spotify, you should feel right at home. As a matter of fact, Koel's client interface is a shameless rip-off of Spotify's. You can search, you can sort, you can view by artists or albums, you can create playlists, you can like/unlike songs, and you can create other users to share the vibes. There are a couple of shortcut keys, too, for the nerds:

With a browser that supports MediaSession, you can control Koel using hardware media keys without even having Koel or the browser focused.

Starting from v5.0.0, Koel provides an instant search feature that performs full-text, fuzzy searches against your database of songs, albums, and artists. By default, Koel uses the TNTSearch engine, which requires no configuration. You can also use Algolia by populating these details into .env:

Similarly, you can use Meilisearch with these configurations:

If you're upgrading Koel from an older version, you'll also have to create the search indices manually by running this command:

All subsequent updates to the music database will be synchronized automatically. 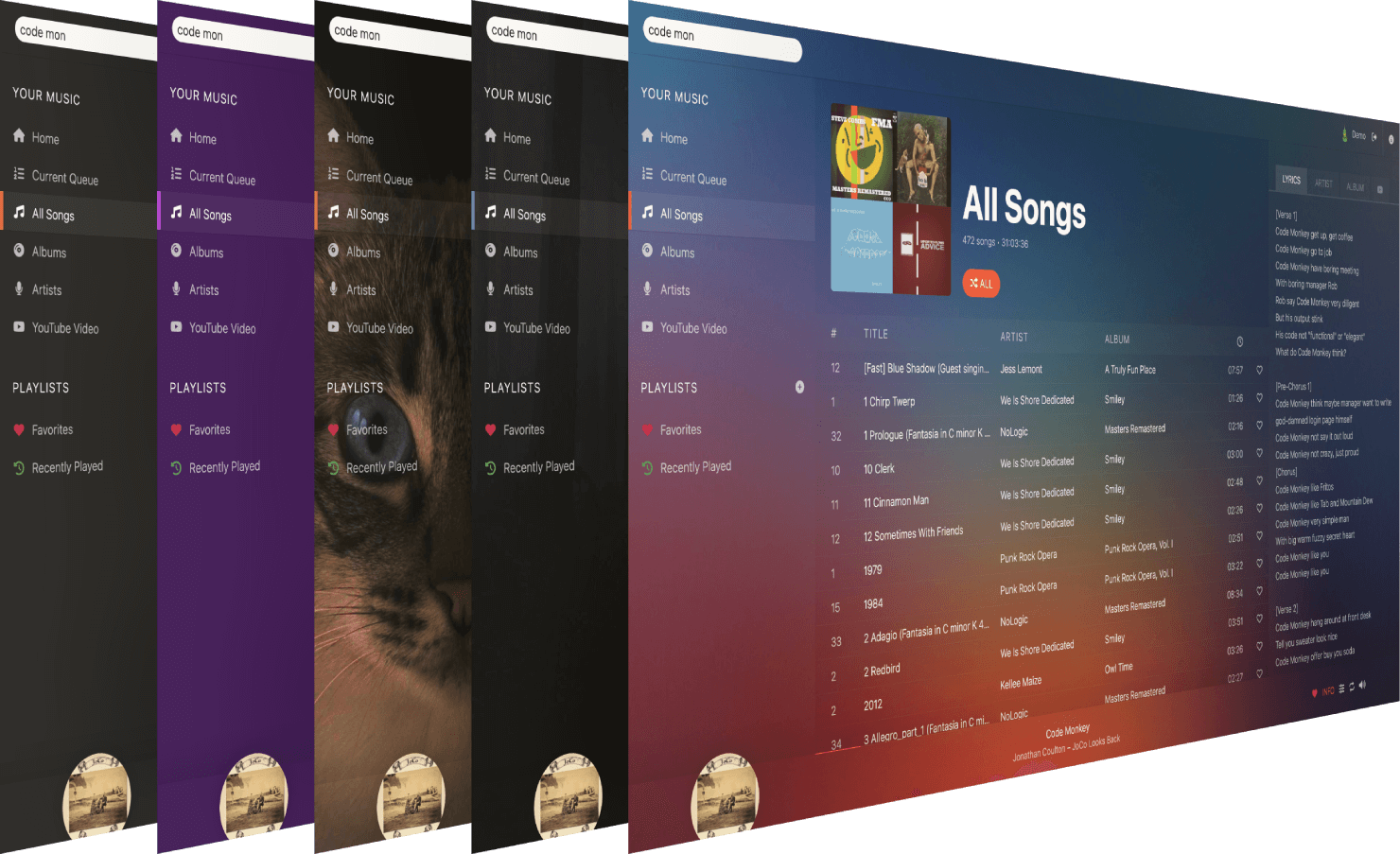 Koel supports multiple themes. You can preview and choose one from from the Profile & Preferences screen. Note that themes are not persisted across devices, as they make use of the browser's local storage.

You can change the artist and album images by dragging and dropping images into the current images in artist/album cards.

Koel supports multiple users. A user can be an admin who has administrative privileges (user and media management) or a standard one. As of current, all users share the same library (though playlists, favorites, and other stats are private). Full multi-tenant support may be considered in the future.

Starting from v3.7.0, Koel has a (mobile) remote controller that lets you control a desktop instance – play/pause, navigate, turn volume up/down, and add/remove from Favorites.

In order to use the feature:

Starting from v4.1.1, Koel comes with a handy CLI command to reset the admin password in case you lose it:

For older versions, you can make use of Laravel's Tinker, as described here.

Koel's fully responsive GUI works fairly well on a mobile device. Certain functionalities are not available (yet), however:

Also, since Safari is the new IE, if you're on iOS, it's strongly advised to use Koel with a non-Safari browser such as Firefox, Microsoft Edge, Brave, or Google Chrome. iOS 14 comes with the ability to change the default browser as well.

For a better mobile experience, it's strongly recommended to use one of the official mobile apps instead.

Start both the PHP server and the client application in one go with yarn dev, which uses start-server-and-test to manage both vite and Laravel:

A development version of Koel should now be available at http://localhost:8000 with full HMR support.

Koel is built on the shoulder of the giants. My sincere thanks go to the folks behind Vue, Laravel, as well as all JavaScript and PHP packages used in the project.

The continuous development of Koel is made possible thanks to the support from these generous sponsors:

Want to help out as well? You can support Koel's development via OpenCollective or GitHub Sponsors.